Family blessings at the capybaras April 29, 2019

Three young capybaras are growing in the South America enclosure. This species, considered as the largest member of the rodent family, regularly reproduces in our Zoo. 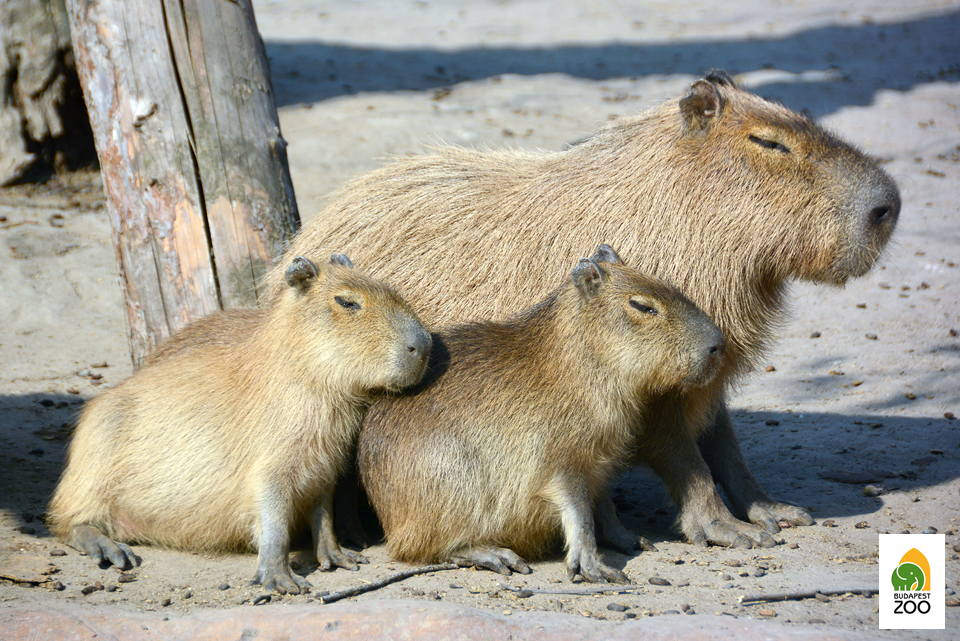 Although our youngest capybara youngs are already several months old, but when they were born, it was still cold and they stayed in the internal enclosure of the South America House where they were less noticeable for visitors. However, as the weather improved, capybaras may access outside, in the outdoor South America enclosure, and it is easier to observe the growing babies here.

Currently the public can see three capybara youngs. The two older of them were born at the end of last year, and the younger one, of course from a different mother, in the first days of this year. Despite the several weeks age gap, the younger animal is not lagging behind its somewhat older half-siblings. We believe that as a single young, it received a lot more milk from the mother thus it could grow somewhat quicker than the other two animals, which are also appropriately developed for their age, and this is why no significant size difference can be seen between them, despite the age gap.

Hydrochoerus hydrochaeris, also known as capybaras, are native to South America: they live in the forests alongside the Amazonas as well as the grass fields called llano, where after heavy rains the clayey ground is not capable to draw in water and result in grassy areas covered in shallow water. Concerning their life-style, they are closely linked to water and this can be observed on their bodies. Minor finger webs can be seen amongst their fingers, and their eyes, ears and nostrils are located on the top of their heads, similarly to hippos or crocodiles. It follows from the location of eyes, nose and ears, that one has the impression that these 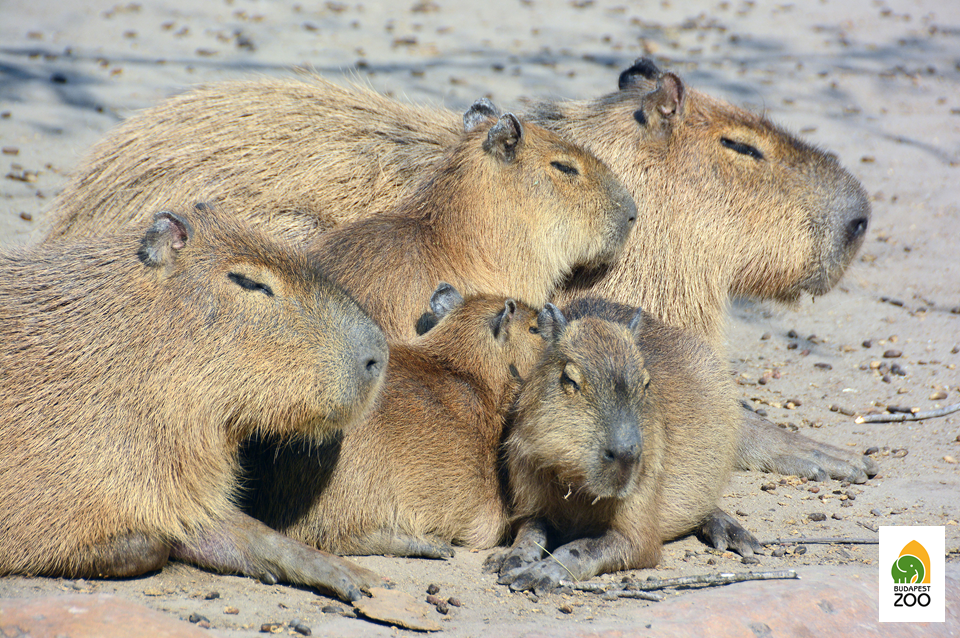 animals show an insightful face. Just look at the serious faces of the youngs.

Capybara belongs to the order of rodents, and more precisely to the cavy family, however, grows bigger than any other rodent: fully grown animals may be as heavy as 50 to 60 kg. Females are pregnant for 130 to 150 days, and their offsprings, one to eight per birth, weigh usually one and a half kilo, however, in zoos new-borns weighing two kilos are not rare either. Youngsters grow up quickly and they start to try solid food only after a few days, but they don't stop sucking the mother's milk until they are three months old. At the age of one year they are fully self-sufficient and independent and they reach their sexual maturity when they are one and a half year old. In nature, their average life-span is around six years, which is rather long for a rodent, but sometimes eight to ten year old specimens can also be found. In zoos they live significantly longer, 12 year old animals are not something extraordinary, what is more, the capybara that lived in a zoo for the longest period of time survived its 15 birthday by a couple of weeks in an Australian zoo.