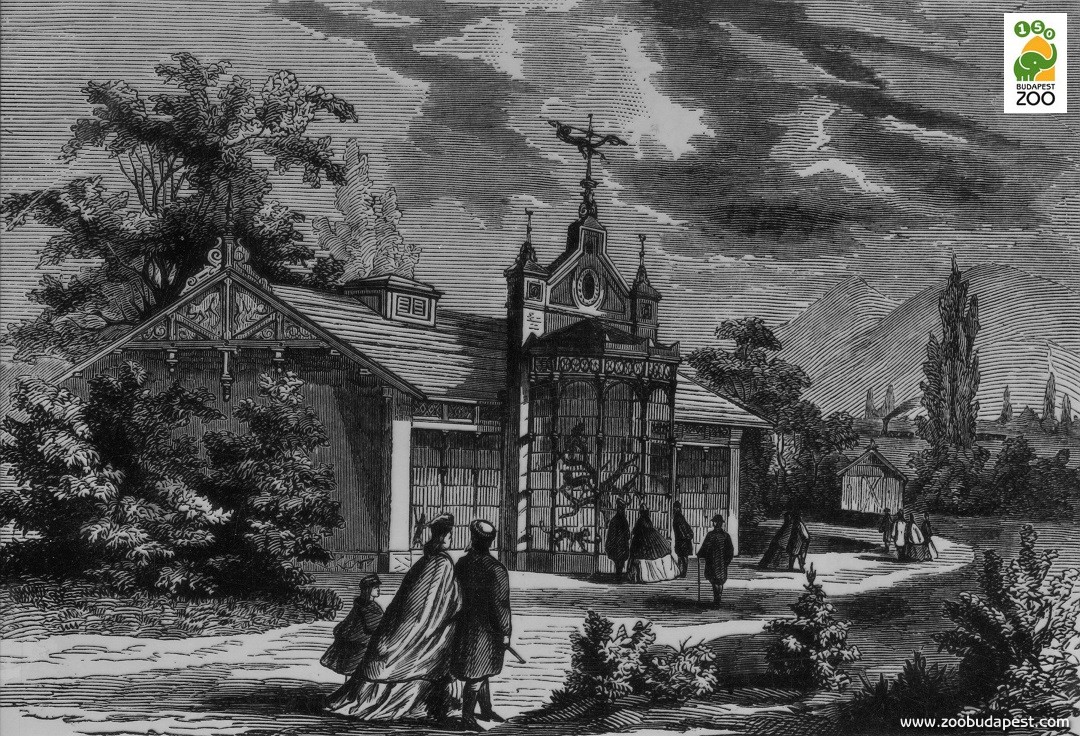 One of the specialities of the Budapest Zoo and Botanical Garden is its protected historic environment, evoking the atmosphere of the first decades of the twentieth century. Stroll anywhere in the garden and you will find this remarkable built heritage, with every animal house, building structure and even the smallest sales pavilion telling their own unique history.

The first buildings of the Zoo, which opened in 1866, were designed by the renowned architects of the era, Antal Szkalnitzky and Henrik Koch jr., who created such magnificent works as the Csokonai Theatre in Debrecen, the Vörösmarty Theatre in Székesfehérvár, the Dugonics Square building of the József Attila University in Szeged, or in Budapest the four corner apartment houses at Oktogon, the University Library, the Thonet Garden, and the Puskin utca building of the former Institute of Physiology. 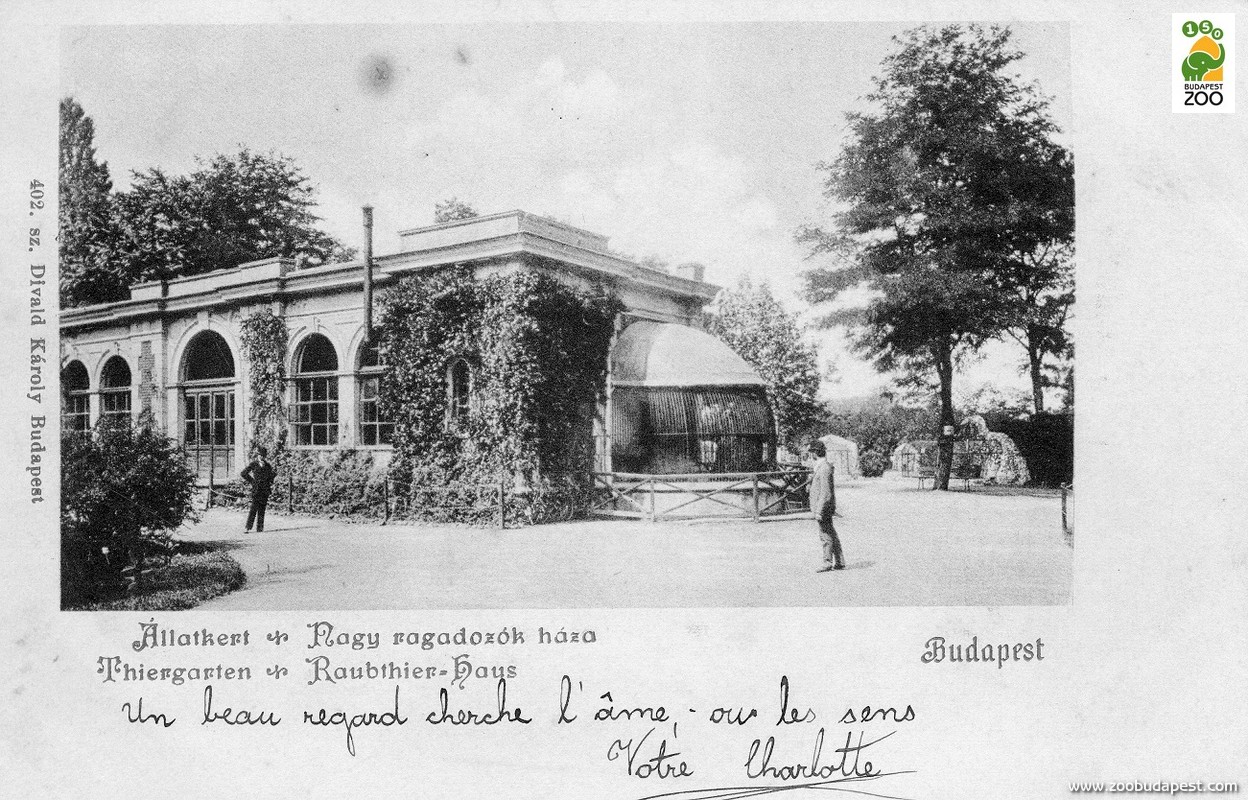 The plan documentation required for approving the Zoo buildings designed by these architects was submitted on 13 April 1865 and the royal free city of Pest issued the building permit on 6 April. József Pucher, master builder, István Kern, locksmith, and István Strohoffer, carpenter, were engaged to construct the buildings. The animal houses and the other facilities were completed by 28 July 1866 at a total cost of 28 512 forints.

The Monkey House was the biggest and most expensive out of the eleven larger and several smaller buildings, while the Pheasant House and the octagonal bird cage were the most decorated. Birds of prey were given a three-part iron cage and the bear enclosure was closed off by the artificial rock at the back. Actually all of the buildings were built in the Romantic style, in a manner also showing Swiss features, in general characteristic of the Hungarian bath buildings and other pavilion-like constructions of the era.

And as the animal population grew, the original animal houses could no longer provide sufficient space for the animals. For example, a special ‘jarrafhouse’ had to be built to accommodate the giraffe offered by Emperor Franz Joseph on the intervention of Empress Elisabeth of Austria. This transfer took place in 1868. The building was designed by Antal Lohr and the 4206 forints required for the construction works were largely financed from proceeds collected by the issue of lottery tickets.

The next, more substantial construction works took place in 1876, when the animal house for large predators, lions and tigers was opened in August. This building was designed by Alajos Hauszmann and constructed by building contractor Antal Schirmbrandt. Two years later, a brand new aviary was opened, designed by Kálmán Gerster. The necessary funds were provided to the Zoo by the renowned patron of natural sciences in Hungary, Andor Semsey. However, the total construction costs of the new ornamental gate built in 1885 were financed by the Zoo itself. 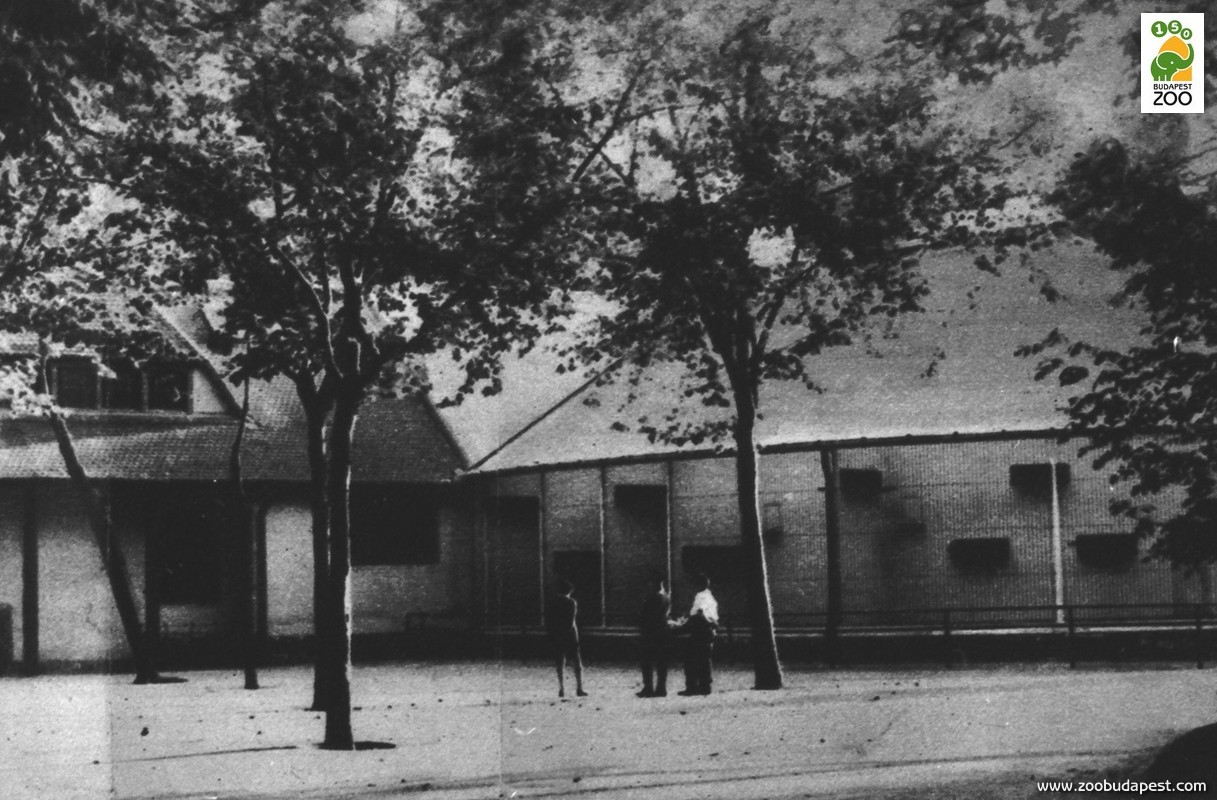 Since the Municipality of Budapest, which took over the Zoo in 1907, decided to reconstruct the garden completely, the majority of the buildings then existing were pulled down. Only two buildings remained: the music pavilion, built from the donation provided by Count János Pálffy in 1866, and the Owl’s Castle, which was also one of the first buildings in the garden and used to stand on site of the current bird rescue centre. Although this was also demolished during the reconstruction works, it was rebuilt later with minor changes at the same place where it currently stands.

During the great reconstruction of the Zoo between 1909 and 1912, the technical works were managed by architect and university professor Kornél Neuschloss. He also prepared the designs of two key buildings, the Main Gate and the Elephant House, free of charge, to avoid any conflict of interest. However, the majority of the animal houses were designed by two young and talented architects, Károly Kós and Dezső Zrumeczky; both of them were just starting their career and had previously been Neuschloss’ pupils during their university years. The iron structure of the Palm House, the reinforced concrete frame of the artificial rocks and the buildings of the service yard were designed by Gyula Végh, an engineer at the Municipality of Budapest. Finally, on 20 May 1912 the completely reconstructed Zoo was opened once more to the general public. 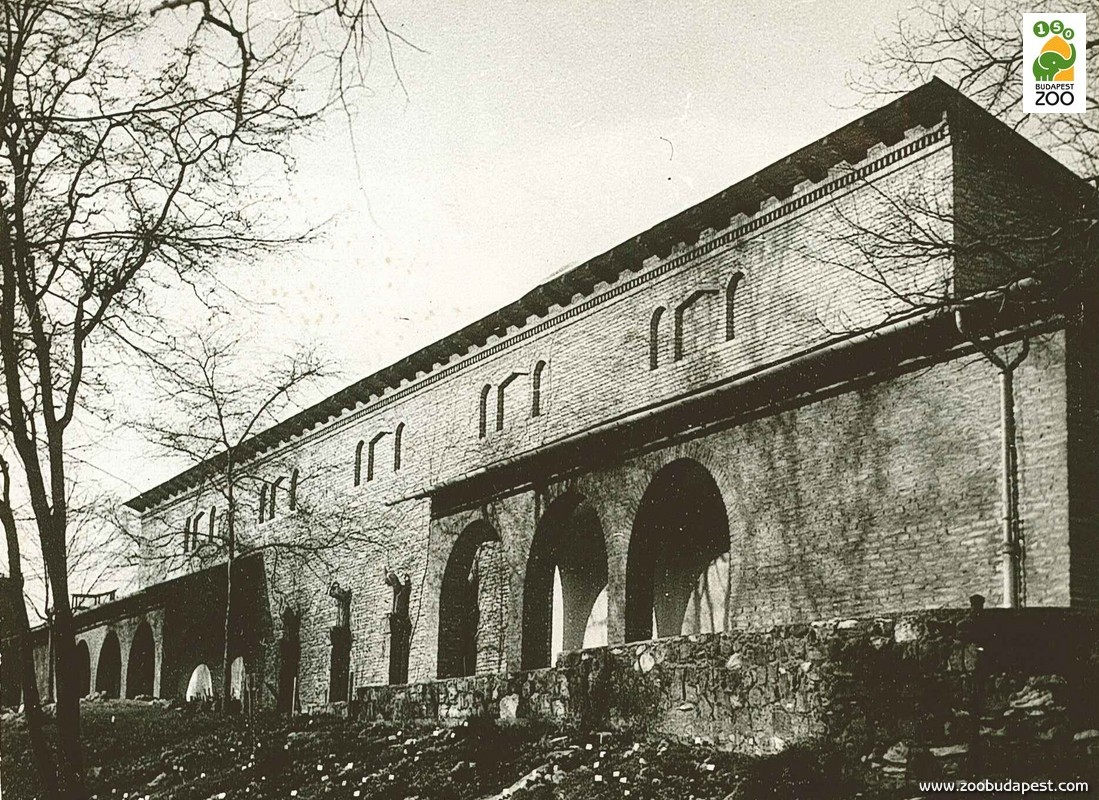 In the subsequent decades, relatively few new animal houses were built; instead, the existing buildings were extended and modernised. For example, a tropical freshwater aquarium was built in one of the wings of the Palm House during the 1920s. The Monkey House was extended in 1936 with a glass-roofed building wing of considerable size, attached to the northern side of the building, at a total cost of 120,000 pengős.

Almost every building sustained smaller or larger damage during the Second World War and some were totally destroyed or at least put to a condition where reconstruction was deemed uneconomic. The latter, among them the music pavilion, built in 1866, and the Giraffe House and Buffalo House, opened in 1912, were actually pulled down. 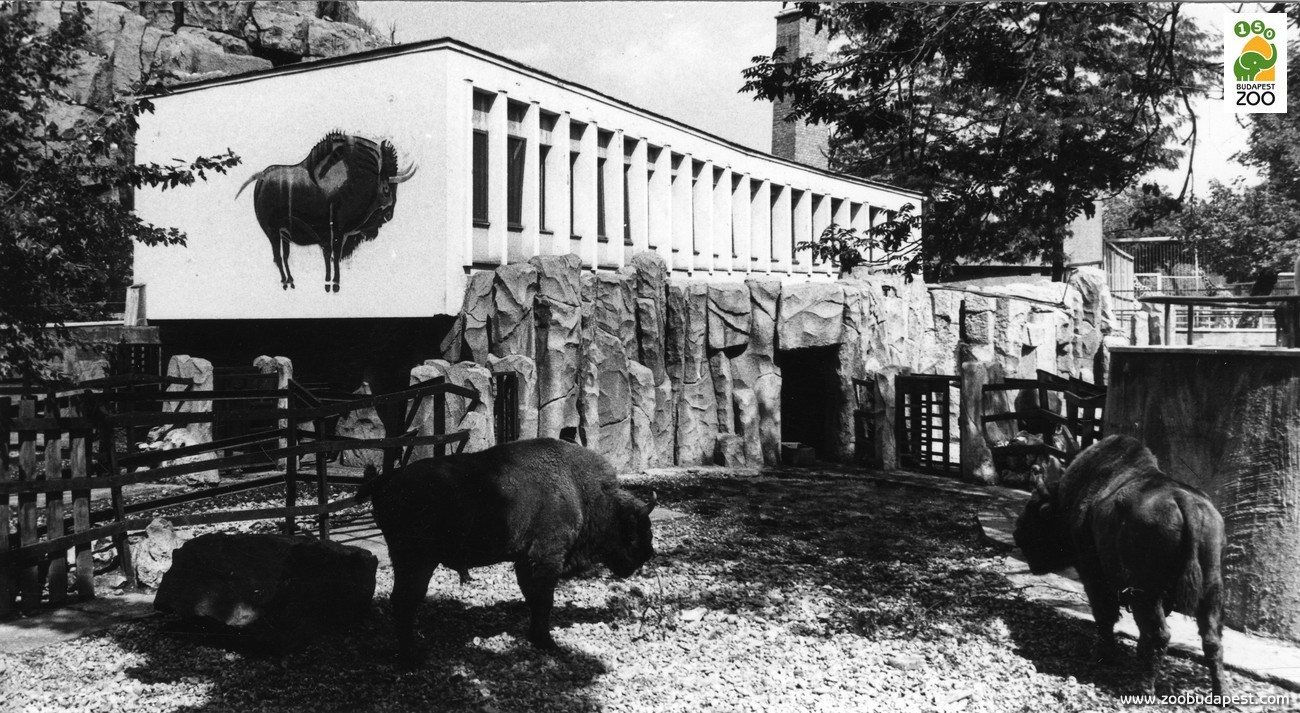 However, not only were demolitions carried out, but new animal houses were built as well. Those buildings where birds used to winter destroyed during the war were replaced by a new Bird Wintering House, built in 1954, currently known as the Xántus János House and displaying South East Asian fauna. The Buffalo House was opened in 1963 and the Giraffe House was opened in 1965, both designed by Gyula Kéri and Ferenc Bodnár. The new Camel House was completed by 1967. This building exists today, used as a part of the Savannah Complex and currently housing the rhino stalls.

Further construction works were accomplished during the 1980s. For example, the Great Ape House (currently in operation as well) was completed in this decade, though one would hardly recognize its enclosures due to the significant developments made over the past decades.

During the period starting in 1994, the Zoo first and foremost focused on the modernisation and development of the existing listed buildings. It took only a little more than two decades for the Zoo to modernise every building of the garden: now the historic buildings shine in their original glory; meanwhile, the animal enclosures housed within them have been totally transformed to meet the biological needs of the animals and the requirements of our age in every respect.

However, not only were the old animal houses renewed, but also some new facilities were constructed. The Savannah Stall and the attached Elephant Hall (opened in 2008) are the largest of these new facilities, if we don’t count the Magic Mountain, which opened in 2012 and was established inside the Great Rock, built in 1912. 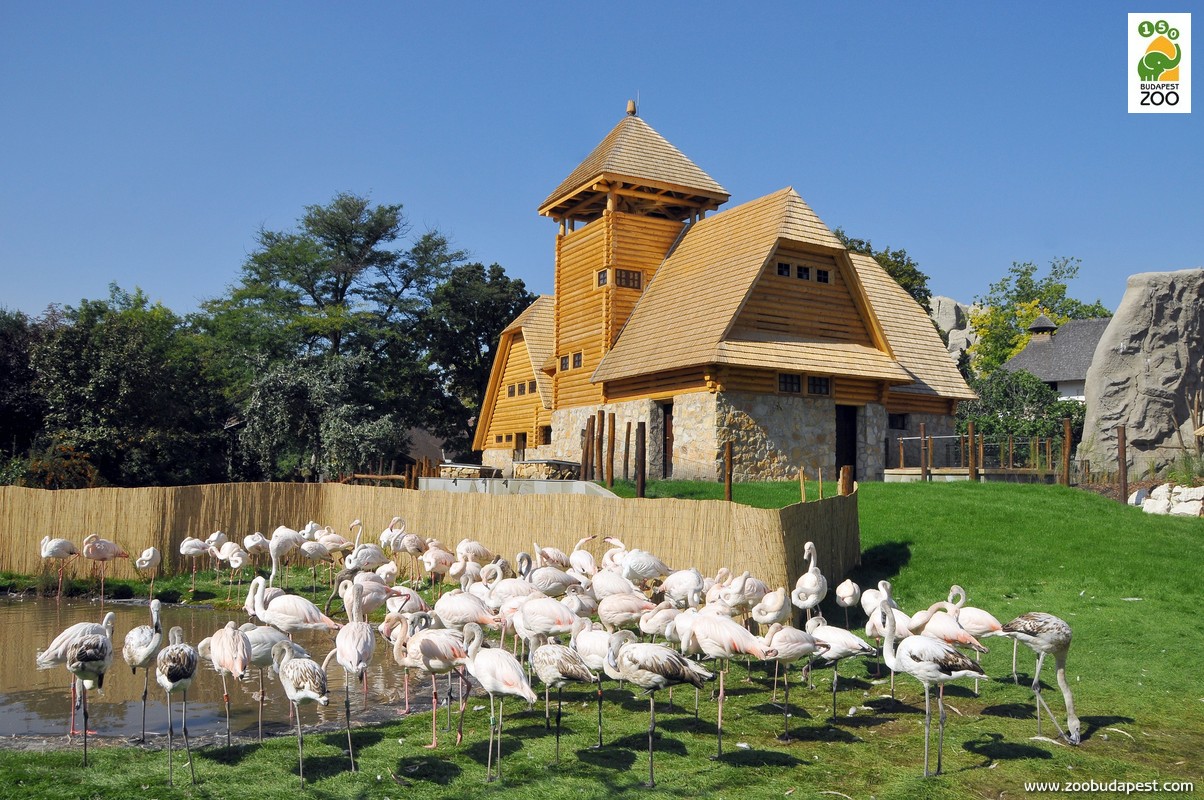 Three animal houses were built recently that could actually be considered as “resurrections” of old animal houses. The Crocodile House, the Buffalo House and the Giraffe House, designed by Károly Kós and Dezső Zrumeczky and pulled down over the years, were rebuilt on the basis of the original plans, but in a significantly up to date manner. As such, the external and appearance of these buildings reminds us of the old buildings, while their enclosures meet the requirements of our age.

The following list includes the major buildings of the Zoo also standing as of today, indicating the year of their opening and the names of the designers. Obviously, the list does not include many smaller buildings or the service and maintenance superstructures (storage areas, stalls, feed kitchen, etc.), located in zones not accessible to the general public. Most of these buildings, and even the sales pavilions, were built during the period between 1909 and 1912.

For those looking for a more detailed insight into the Zoo’s built heritage, we recommend our book titled "Állatkerti műemlékek" (Historic monuments of the Zoo) published in 2012, containing further interesting information about the buildings of the Zoo.