Again the rare Persian leopards have reproduced themselves in our zoo. The two parents, Cezi and Nadir arrived to Budapest in 2003, so far they had six offsprings but in the recent years there was no successful reproduction. Until now! Dante, the youngest cub is turning two months old in these days. He introduced himself to the press on Wednesday morning, and from Thursday the public can also visit the newborn. 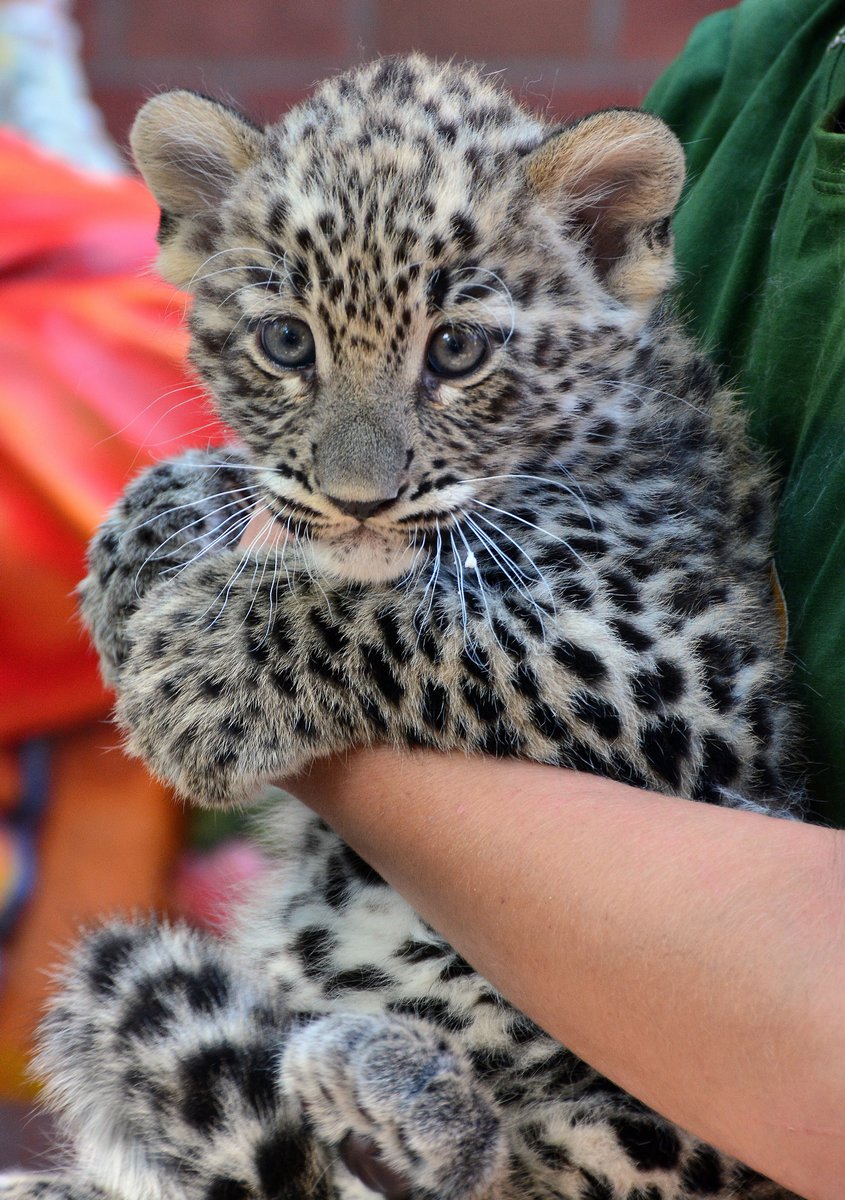 Our zoo enriched with another important reproduction. This time the rare leopards had new family member. Although the cub is two months old now, so far only the zoo keeper was allowed to see him. On Wednesday he was introduced to the press and in the following days to the public's eye.

There is more than a hundred years old tradition of keeping leopards, also known as panthers in our zoo, but these rare species have only arrived ten years ago, in 2003 for the first time. That was the year when we joined the European captive breeding programme for Persian leopards. In 2003 - under this programme -  two young leopards arrived to our zoo, Cezi the female came from the Czech Dvur Králové nad Labem Zoo, and Nadir the male from the French Mulhouse. Out of their marriage one cub (Asszír) was born in June 2007, another three cubs (Bella, Bara, Bahar) in June 2007, and two more(Csenge, Csiú) were born in September 2008. The newborn, which was born on the 10th of June, is the seventh offspring of this leopard breedingpair. 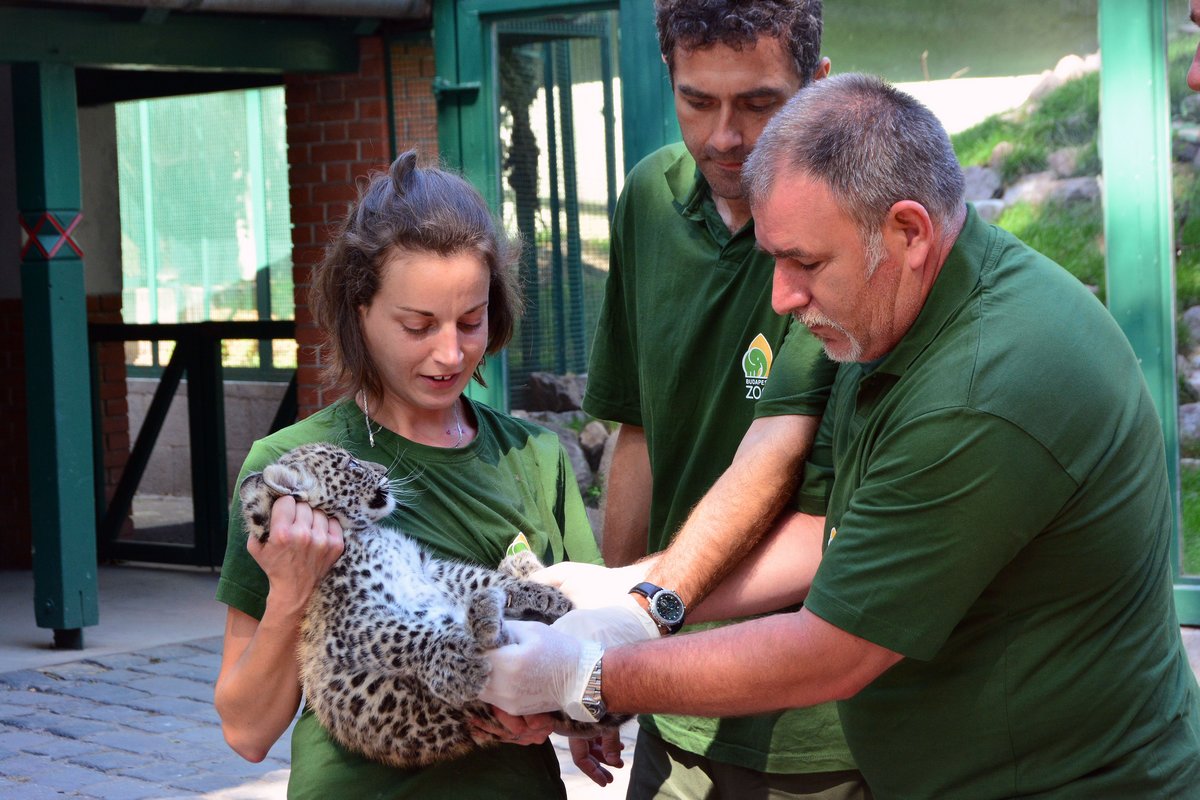 The cub and his mother have spent the last two months away from the eyes of public in a „delivery room". The time has come when thelittle oneneeds to get the first neccessary vaccinations. For this the cub needs to be touched - also must be temporarily separated from his protecting mother –and besides the vaccination we also made some other examinations and tests. All this took place on Wednesday accompanied by the attention of the press.

First the young leopard got the combined vaccine which developsimmunity against three viral infections, the feline panleukopenia, the feline viral rhinotracheitis and against the feline calicivirus. Afterwards the ID chip delivery and the oral administration of the deworming paste took place. Finally the cubs gender was examined, and as a male leopard he was named Dante. The animal keepers were looking for a D-capitalized name, as in the case of the Persian leopards, the custom is that at each reproduction the cubs' names start with the following letter from the alphabet.

The cub and his mother are expected to be seen on Thursday in their leopard-runway which is close to the tigers. The leopard father must be separated from the female leopard and the cub, so he can use the runway during the nights only. 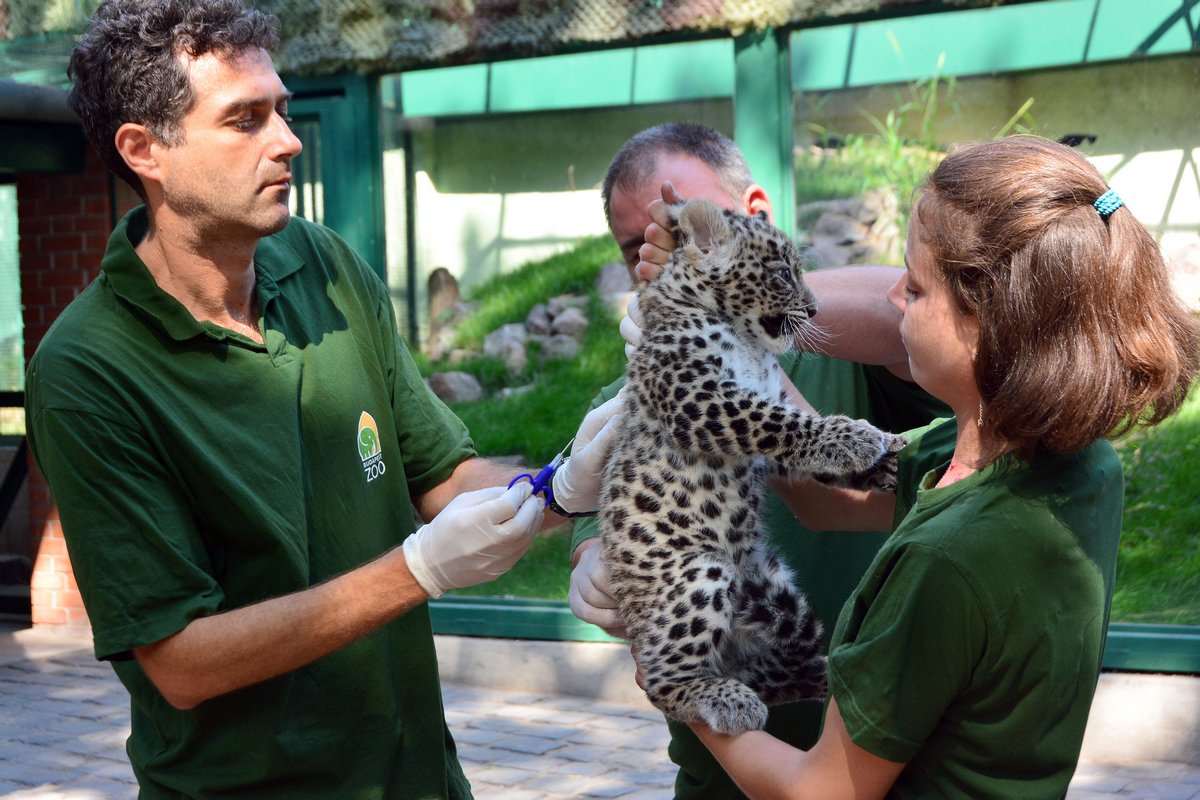 The Persian leopard is the largest in size among the subspecies of leopards, or in other words panthers. This race is not only native in Iran, but also in Iraq, in Afghanistan, in Tajikistan, in Turkmenistan, in Uzbekistan, and in Armenia. In it's habitat the panther is considered as an endangered animal, the wild population is estimated about less than two thousand indviduals. There are other 160 Persian leopards living in the zoos around the world, among these a little bit more than a hundred are living in animal gardens which are participating in the slightly more than a century old breeding programme created by the EuropeanAssociation of Zoos and Aquaria. The female leopards bring their offsprings to life after a 90-105 days long pregnancy, the number of the cubs is between 1-6, but the average is 2-3. The Persian leopard babiesusually open their eyes after ten days, they live on breastmilk for three months, and they reach the sexual maturity at age three.

In the wild  the average lifespan is only 7-9 years, while in zoos they can even live up to 21-23 years.